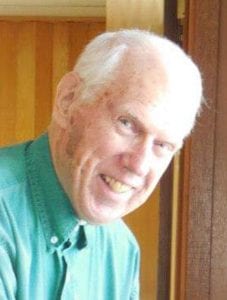 He was born on Nov. 11, 1925 in Staples, Minnesota to Roy and Jessie (Young) Quance, the fourth living child and first birth his mother had a doctor attend.  The family moved to St. Paul, Minnesota during Arthur’s high school years, and he graduated from Mechanic Arts High School in St. Paul.

Shortly after graduation Arthur was drafted into the army and entered service on June 6, 1944 as a medic.  Although he was in the army, he served aboard ships and made trips to Europe and Panama, transporting servicemen and family members.  After his two years in the service, Arthur returned to academic life at Union College in Lincoln, Nebraska.

Arthur met Carol Magnuson at a church-related camp meeting the summer he was 14 years old.  Over the next 10 years they kept in contact, and interestingly enough, spent every New Year’s together. On May 29, 1950 Arthur and Carol were married in the Little Brown Church in Nashua, Iowa, with Arthur’s sister Arva serving as bridesmaid and his brother Merle as best man.  The newlywed couple returned to Lincoln, Nebraska where Arthur finished his last year of college, graduating in May 1951 with a B.A. in English.

Now as a high school English teacher, Arthur and Carol moved to Pender, Nebraska, where Arthur also served as a coach for the high school baseball team.  During their time in Pender, their daughter, Deborah, was born.  After Pender, Arthur also taught in Wahpeton, North Dakota.  In part due to conflicts between high school responsibilities and Sabbath observance, Arthur decided to change careers, and the family moved to Madison, Tennessee so he could pursue a B.S. in Nursing.

In 1958 the family moved to Duluth, Minnesota, where Arthur completed the requirements to become a Certified Registered Nurse Anesthetist.  He also taught a couple nursing classes during this time.  While in Duluth in 1959, Arthur and Carol’s son, Derek, was born.  Derek was a happy little boy who loved to ride his tricycle and always wanted his hands clean, just like Arthur.  Shortly before his second birthday, Derek was hit by a car backing out of a driveway and died within the hour.  That very same day, Arthur had accepted a job as anesthetist in Carol’s home town.  Derek was buried in Ortonville, Minnesota next to Carol’s father, and Arthur, Carol and Debbi moved to Ortonville a month later.

Arthur served as anesthetist and soon added hospital administrator, these days known as CEO, to his duties for the next 15 years. During these years, Arthur also served on the school board of Maplewood Academy, where Debbi attended high school.  In 1976 Arthur and Carol moved to Gettysburg, South Dakota, where Arthur again was hospital administrator and anesthetist.

After Arthur retired, he took up rug weaving at the local senior center.  Over the years, he made rugs that won awards at the county fair, rugs that are in several family members’ homes, and one 49-foot rug for a Victorian home in Minneapolis.  He was very meticulous in his rug making, as he was in everything he did.

Arthur also was a great friend to a retired lawyer who he visited every day, and took to his medical appointments in Pierre and Rapid City.  For many years, Arthur delivered or picked-up cars around South Dakota for the local car dealership, at one time even delivering brand new police cars to Pierre.

In December 2018 Arthur and Carol moved to Loveland, Colorado to be closer to their daughter.

Arthur was a life-long member of the Seventh-day Adventist Church, often preaching in the small rural churches the family attended.

He is survived by his wife, Carol, daughter Debbi and son-in-law, Steve Lake, grandchildren AJ and wife Alicia Lake, Alex Lake, and Anjuli and husband Joshua Tenborg, and several nieces and nephews.

Graveside service with Military Honors will be 2:30 p.m., Monday, June 17 at Fort Logan National Cemetery in Denver.  Please visit www.AllnuttLoveland.com to share your remembrances of Arthur.