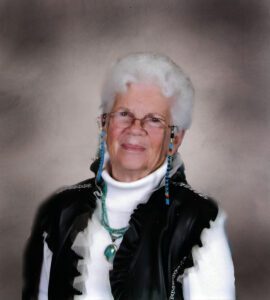 Betty Lou Kost, 88, of Eagle Butte, died Monday, Sept. 6, 2021 at the Mobridge Regional Hospital. Her funeral service was held  Monday, Sept. 13, at the Holloway Arena in Parade. Burial was at the Eagle Butte Cemetery under the direction of Kesling Funeral Home of Mobridge.

On March 11, 1933, Jack and Alberta Hayes Strong welcomed their first born, a beautiful, brown-eyed girl named Betty Lou.  Betty Lou Strong was brought into this world with the aid of a county nurse at Grandma Hayes’ home near Glad Valley – her folks were sheep herders following the sheep from hill to hill in their sheep wagon.  Betty Lou grew up riding her pony Snooky to herd the sheep.  She bathed in the dam, baked in the summer sun, and slept in the wagon.  While riding Snooky, she dreamed of being a cowgirl – a dream that she lived out in a big way through her children, grandchildren and now great-grandchildren.

As Betty grew up, her Momma wished for her to know the finer side of life and so, Betty was sent to live with Grandma and Grandpa Hayes for a short time and while there graduated from Morgani Modeling School in Denver, Colorado.  Betty loved showing her girls how to set a striking pose when it came time for queen contests, proms, and pictures.  To this day, her daughters and granddaughters know that pearls will compliment any outfit.

Betty graduated from Eagle Butte High School in 1951.  That summer she attended Black Hills State College and that fall began teaching at the Strool Country School just south of Prairie City.  She also taught one year in Pavilion, Wyoming.

Betty Lou met her match in tenacity, hard work, and no quit in 1954 when she married Anton (Cotton) Kost, a handsome rancher. Together they commenced to building a ranch and farming operation with Betty Lou doing everything in her power to make it all work. That included attending summer school and taking extension courses to obtain that valuable teaching degree.  Betty taught second grade and when the Cheyenne River Agency moved to Eagle Butte, she moved to kindergarten.

Betty made kindergarten a famous and special place in Eagle Butte for over 40 years.  Betty loved music and invited fellow teachers, Mrs. O’Neil and Ms. Sutphen to gather in her classroom for music.  Betty produced outstanding musical programs, and busy as they were, she could coax Anton into making elaborate backdrops for her programs.

In 1987 tragedy struck when Anton was killed in a farming accident while planting winter wheat south of Eagle Butte.  Betty continued to teach and partnered on the ranch with son John, a recent graduate of Kansas State University.  John put his Animal Science degree to work.  Daughter Melissa and husband Doug Maher were vital to the transition of the operation as well.  The workload was heavy – Grandma Betty was thrilled when granddaughter Lacy and grandson Dane came home to help.  Betty was a director for Production Credit Association (PCA) and in 1988 she was presented the South Dakota Pioneering Spirit Award in recognition of “The Tenacity, The Ability to Improve, The Unselflessness of the Pioneer.”

In 2002 Betty Lou made the decision to retire from teaching.  That year marked her 48th year of teaching.  Betty was honored to be the National (NAIA) Teacher of the Year in 1993.

Betty Lou loved rodeo.  She was determined that her crew be afforded the opportunity to win at every level.  From horses to pickups and trailers, she made it happen.  She hauled or followed her kids everywhere.  She donated countless buckles and awards.  She wrote countless letters, with a little spending money tucked inside, to her rodeo kids and many others.  When at a rodeo, Grandma Betty was where you went for times, scores, placings, and the answer to “how many til’ me.”  Betty was inducted into the Casey Tibbs Hall of Fame as a rodeo promoter in 2003.

Betty picked up where her folks left off as a prayer warrior for all.  She was remarkable in her Christian walk because she didn’t just believe it, she lived it.

Betty had pretty much been denying that she had Parkinson’s for the past 15 years.  Ever the positive one, she gritted through the debilitating disease.  Among her final words of love and confidence that all would carry on, she smiled ever so sweetly and said, “I loved what I did.”