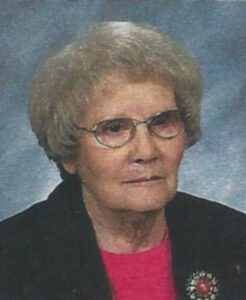 Catherine was born Sept. 30, 1930, to Leon Earnest and Susan J. (Barr) Hall on their farm in Potter County, near Gettysburg, SD, where she grew up the youngest of nine children.

She attended the Kula County Grade School in Artichoke Township and Gettysburg High School. During her senior year and also after graduating she worked at the Potter County Register of Deeds where in those days all records had to be hand typed. She also was a part time secretary for Civil Air Patrol where her salary was airplane rides with her boss.

She married Anton “Tony” Wahle from Lebanon, SD on Feb. 28, 1949, and became a rancher’s wife. They had two children, Timothy “Tim” Lee and Connie Susan. She was a devoted wife and mother.

In 1957 the family, including Tony’s parents, moved to a ranch near Pringle, SD. They attended the Catholic Church in Pringle, SD until it was closed. Catherine was a long-time member of St. John’s Altar Society of Custer, now called Women of St. John’s. She taught Catechism (church school) and was a 4-H leader. She was an officer in the Farmer’s Union Community Club. She always felt a strong bond for neighbors and friends, but after Tony’s passing in 1974 she traded homes with her daughter and son-in-law. She then moved into Custer to be closer to her work and to take care of her elderly mother.

She spent lots of time with her family and attending the grandchildren’s activities and sports. Her hobby was making picture albums and scrapbooks for them.  She was known to many as “Granny”.

Catherine volunteered at church, the food pantry, bingo at the nursing home, and the VFW steak suppers. She was a member of the Custer Senior Center, St. John’s Catholic Church, and a lifetime member of the VFW. Catherine worked for the Custer County Bank, was a legal secretary for thirteen years and also worked for Crazy Horse Memorial, South Dakota State Forestry and Linde Sawmill.

She was preceded in death by her husband, Tony, five brothers, three sisters, their spouses and her beloved son-in-law, Jesse Woodward.

She is also survived by many nieces and nephews and a special friend, Joanne Hoffman, who now lives in Arvada, Colorado.

Arrangements have been placed in the care of Chamberlain McColley’s Funeral Home in Custer.