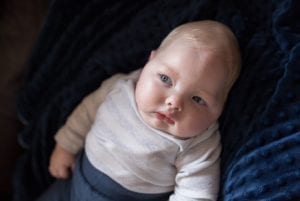 Creed Isaac Brownridge, precious baby boy of Colin and Sarah Brownridge, died peacefully at home in the arms of his parents on June 30, 2018. Funeral services were held Monday, July 9,  at the Prairie Place Hall in Arcola, SK.

Creed was born on Sept. 19, 2017 weighing 6 pounds 15 ounces and measuring 20 inches long. After suffering a severe brain injury at birth, he spent the first five weeks of his life in the NICU and Pediatric floor at Regina General Hospital. From the first few days of his life up until his passing, Creed’s strength, beauty and resilience continued to touch the lives of so many people. He fought hard the first weeks of his life and gave his parents the gift of bringing him home. He spent the majority of his life cuddling with his mom and dad. He was at his best when he was in his parents arms. He melted everyone’s hearts with his piercing blue eyes, snow white hair and adorable plump lips. He was only on Earth for nine and a half months, however his impact on so many lives will resonate for a lifetime.