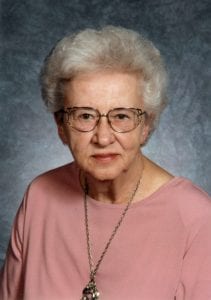 Funeral services were held Tuesday, May 15 at the United Methodist Church, Gettysburg with the Rev. Jeff Adel presiding. Burial followed in the Gettysburg Cemetery.

For many years, Darlene taught rural elementary school and piano lessons.  As an accomplished cook and baker, she catered many community and family events.  Darlene loved to crochet, sharing her beautiful blankets and other creations with family and friends.  For many years, she lovingly made crocheted baby blankets for families in the Gettysburg area.  She enjoyed reading and playing games with her family and friends.

Darlene received many awards and was involved in several activities and organizations.  She was a member of:  Government Planning Council on Developmental Disabilities, Board of Directors of the ARC of South Dakota, Board of Directors of ARC at Oahe, United Methodist Church (Friendship Circle, Bell Choir and Administrative Board) and Potter County Fair Board. She was Secretary and Member of the United Methodist Women and Past President of the Potter County Republican Women.  She received the ARC of South Dakota Volunteer of the Year Award (1995) and Non Legionnaire Award of the Year.

Darlene was preceded in death by her husband, Charles, her parents and five sisters.

Luce Funeral Home of Gettysburg has been entrusted with Darlene’s arrangements. (www.familyfuneralhome.net)