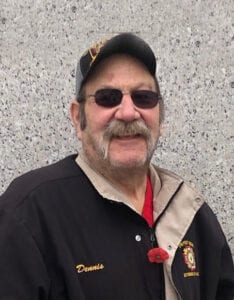 Funeral services will be held at 1 p.m., Friday, June 12, at Sacred Heart Catholic Church in Gettysburg, with Father Jerry Kopel presiding. Visitation will begin at 10 a.m., Friday at the church.

Dennis Al Kessel was born June 21, 1949 in Dickinson, ND to Fred and Susan (Roth) Kessel. He attended school in Belfield, ND, graduating in 1967. He went on to college at Dickinson State for one year before being drafted during the Vietnam War.

Dennis was inducted into the United States Army on Sept. 3, 1970. He served from 1970-1990, retiring as a SFC. He served in Wurzburg, Germany, Indianapolis, IN, Augsburg, Germany, and Pusan, South Korea. Upon retirement Dennis worked for Stark County Social Services in Dickinson for approximately 15 years. In 2009, Dennis and Donna moved to Gettysburg to be closer to family.

Otis enjoyed spending time with family, hunting, wood working, cheering on his grandkids, watching the Denver Broncos, being with his wife, traveling, eating popcorn, and enjoying all types of sweets.

Otis was a proud member of the VFW and American Legion, having served as commander for a short time. He was an immensely proud veteran and proud to have been from North Dakota. He will be remembered as the ultimate military man.

He was preceded in death by his parents, Fred and Susan Kessel and one daughter, Crystal McNeal.

Luce Funeral Home of Gettysburg has been entrusted with Dennis’ arrangements.  (www.familyfuneralhome.net)