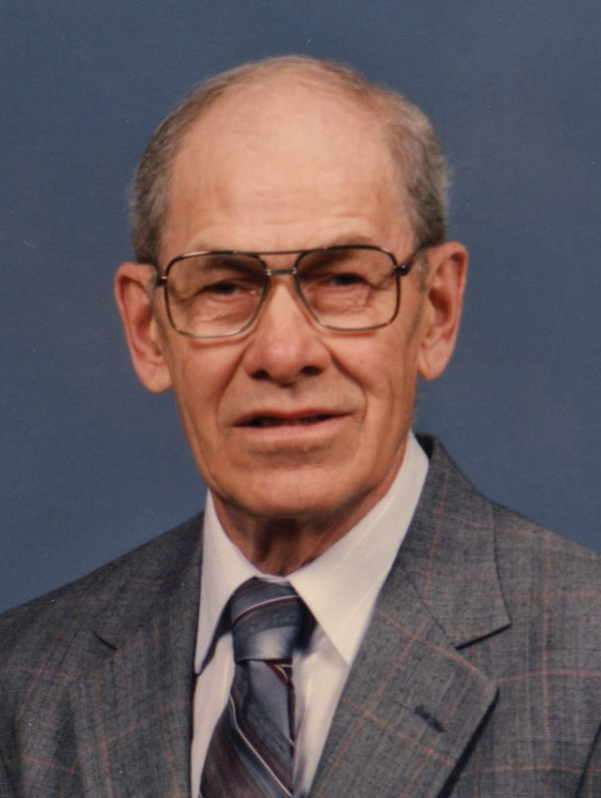 Donald Frederick Rausch was the fifth child of 13 born to John N. and Frances (Duenwald) Rausch.  He was born on July 22, 1921 in Hoven, SD.  Donald grew up on a farm in Potter County and attended St. Anthony’s Parochial School, graduating from the 8thgrade in May of 1937.  He stayed on the family farm and helped his parents from 1937 to 1946.  He also worked on several thrashing crews during that time.

Donald married Agnes Glodt on Oct. 16, 1946 at Sacred Heart Catholic Church in Gettysburg, SD.  They made their home on a farm 7 ½ miles west of Hoven.  Donald loved farming and was always quick to help out any family member or neighbors that needed his help.  He was a very hard-working person throughout his life and was always working in high gear.  Agnes would always tell him to “slow down”, but, of course, he didn’t listen!  The highlight of his farming life is when he had a deep flowing well dug and building the basement house.  To this union three children were born: Kenneth, Allen and Donna.

Donald and Agnes enjoyed going to dances in their early years and playing cards, especially whist tournaments, with the whole Rausch clan.  He also enjoyed playing baseball, basketball, board games, and card games with his children, usually on Sundays, because you never worked on Sundays.  Sundays were a day of rest and he did not believe in working on Sunday because this is the Lord’s Day and we should respect our Lord and God.  Donald’s faith was very strong and praying with his family was a high priority.   Many litanies and rosaries were said with his family, especially during harvest time.  Donald continued to say the Rosary every day of his life!  He was a member of St. Anthony’s Church in Hoven, SD, then of Sacred Heart Church in Aberdeen, SD, and was also a member of the Catholic Order of Foresters for many years.

After 42 years of farming, Donald and Agnes retired in September of 1989 and moved to Aberdeen, SD.  They loved going to their grandchildren’s activities in Aberdeen and in Pierre, such as baseball, basketball and soccer games, swim meets, school programs, band, music and dance recitals.

Agnes passed away in January of 2012.  After that, Donald lived with his daughter, Donna, for six months then moved to Aberdeen Health and Rehab.  In May of 2014, he moved to assisted living at Bethesda Town Square and then in June of 2016, he moved into the nursing home at Bethesda Home, where he was residing at the time of his death.

Schriver’s Memorial Mortuary and Crematory  is in charge of arrangements. View his service via the live stream service link at www.schriversmemorial.com.