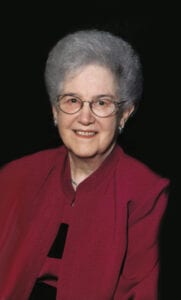 Doris Elaine Stoner was born during the depression on the family farm, 5 ½ miles west of Seneca on October 19, 1923 to Charles E. and Sylvia L. (Osborn) Stoner. She attended rural country school, walking daily with her siblings until it was time for high school. Due to the cost of room and board, she moved to Gettysburg to live with her Aunt Lillian Bohnhoff. Doris graduated in 1941 from Gettysburg High School and went on to Aberdeen where she received her teachers’ certificate. She attended school during the day and washed dishes at a local diner where she received a free meal and some funds to help pay for her schooling.

Doris returned home where she worked for area country schools. Later she went to California where she worked at Lockheed Airplane factory. At the end of the war, Doris returned home for what was supposed to be just for the summer. That fall a teaching position was available at Roy School. Over the years she was sure she had substituted for every country school in the area.

On May 4, 1946, Doris married Vernon Larson in Rapid City and their life on the farm began. Together they raised seven children. In 1953, they established their family farm four miles North of Gettysburg. Doris kept busy helping Vernon on the farm, raising the children, and maintaining the family home. In the mid 1970’s Doris returned to Aberdeen during the summers to renew her teaching degree. She taught at North Lowell Country School for several years and later substituted for many other schools. She finished up her teaching career at Gettysburg Elementary School.

In 1975 they semi-retired and moved into Gettysburg where they were able to enjoy a little slower life style. They enjoyed time to travel and see family. Doris was active in Eastern Star, holding many offices over the years, she was also a 50-year member of the American Legion and VFW Auxiliaries. One of the great joys, besides family was her faith. She had an unwavering love of the Lord and was active in many church functions at the United Methodist Church.

Luce Funeral Home of Gettysburg has been entrusted with Doris’ arrangements. www.familyfuneralhome.net