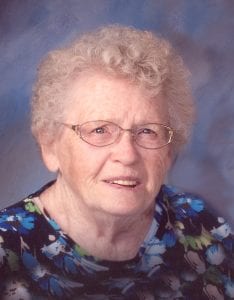 The last of the Hobbits has returned to her final resting place in the Shire where she has been reunited with those whom she has dearly missed.  We who are left behind feel the loss of her presence, but rejoice that she is no longer in pain.  Dorothy died on Aug. 10, 2019, at the age of 89.

Dorothy Virginia Roseland was born Feb. 7, 1930, in Sully County, SD, to Dayton and Florence (McGee) Merrill.  She was raised on the family farm with her two sisters, Dora and Daisy, and her seven brothers, Ray, Bud, Chuck, Ben, Don, Eddie, and Allen.  She met the love of her life, Robert “Bob” Roseland, as a teenager at a dance.  From that first dance came a lifetime of romance.  Bob and Dorothy married on Oct. 18, 1947.  Four children were born to this union, Robert, Terry, Doyle, and Darcy.  As a family, they enjoyed many a Sunday drive in the hills and picnics along the way.  Bob and Dorothy had been married for 57 years when Bob passed away in 2004.

Dorothy held a myriad of job titles throughout her lifetime, ranging from trailer court manager, to salesclerk, to greenhouse worker, to welcome center hostess, to rural mail carrier, just to name a few.  Her most important job title, however, was that of mother/grandmother.  She loved family gatherings and was at her happiest at those times.  Nothing made her smile more than visits from family, especially visits from her grandchildren, great-grandchildren, and great-great-grandchildren.

In her later years, Dorothy enjoyed traveling with her sister, Daisy.  They visited friends in Arizona and family in Colorado.  They even adventured to the International Peace Gardens.  Most of their travels were in-state, going home to Gettysburg.  Although Dorothy always said they were going to visit family, those who knew her were quite aware that it was truly the Gettysburg Bakery that held her heart.  A check to the freezer upon her return would reward one with a large number of doughnuts and rolls.

Dorothy was also known for her volunteering spirit.  She worked untold hours in the Piedmont Valley Food Bank and the SHARE program.  She was a longtime member of the Happy 10 Sewing Club and a lifetime member of the VFW Auxiliary.

Dorothy was preceded in death by her husband; her three sons; her nine siblings; her parents; and numerous other family members.

Mass of Christian burial will be held at 10:30 a.m. Thursday, Aug. 15 also at Our Lady of the Black Hills with Father Andrzej Wyrostek officiating.  Burial will follow at Black Hills National Cemetery Near Sturgis.

A memorial has been established.

Condolences may be sent to the family at www.kinkadefunerals.com.