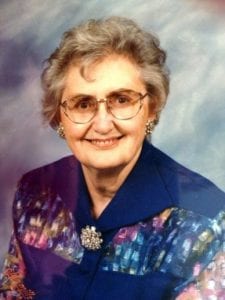 Funeral services will be held at 11 a.m., Thursday, June 27 at the United Methodist Church, Gettysburg, with Pastor Jeff Adel presiding. Burial will be in the Gettysburg Cemetery. Visitation will be one hour prior to the service.

Edna Orvilla Machan was born April 15, 1925 to Kurt and Olive (Josephson) Machan.  She spent her life on a farm only three miles from Gettysburg until moving to Pierre in November 2016.  She lived with Gail and Howard Boke for a year in Parkwood Apartments, and then she moved to an apartment across the hall.  In May 2019 Edna moved to Maryhouse.

Edna won many awards with her paintings.  She has exhibited in Aberdeen, the Museum in 2011, the State Fair, the Methodist Church in 2010, Mobridge art shows, Faulkton art shows, the Springfield, MO Art Museum, Sioux Falls and various other places. She has entered art contests sponsored by Ducks Unlimited and for the pheasant stamp.  She showcased a variety of mediums including oil, watercolor, pen and ink, calligraphy, palette knife, and scratch art. As for subject matter, she loved painting still life and animals.  She painted rocks, and they looked like real animals. She taught painting classes. Edna enjoyed painting every Thursday afternoon at the Senior Center and invited all to paint with her.  She had no formal training except for a three-year correspondence course from Westport, CT that she completed in 1969.  Edna was left-handed! Edna donated a painting, “The Wood Duck,” to High Plains Art Council in 1981 for a drawing at the Gettysburg Arts Festival.

Edna was chosen to receive the Volunteer of the Year award in 1988 for services given to the Manor residents with her art.  She and two staff members accompanied her to Minneapolis to receive the award.  She named each painting, for example, her fawn, painted in 1980, was named “Independent.”

Edna’s work can be seen in the Bank of the West where there is a large mural and in the Methodist Church where she has paintings and the large windows that she designed.

Luce Funeral Home of Gettysburg has been entrusted with Edna’s arrangements. (www.familyfuneralhome.net)