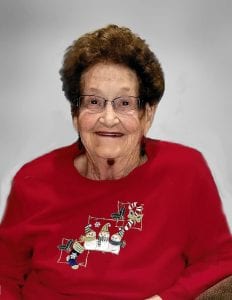 Elaine Ahlemeier, 91 of Sioux Falls, and formerly of Gettysburg, died Wednesday, July 3, 2019 at her home in Sioux Falls. She has donated her body to Science at USD, Vermillion, SD.

A service was held Monday, July 8 at the United Methodist Church, Gettysburg with Pastor Jeff Adel presiding. There will be a celebration of life at Royal Oaks Apartments in Sioux Falls at a later date.

Elaine Hansen was born March 23, 1928 in Gettysburg, to Charles “CP” and Lillian (Stambach) Hansen. She attended Gettysburg Public Schools and then earned a bookkeeping/accounting degree from Northern State College in Aberdeen. She worked at the Gettysburg Creamery after high school, was Potter County Deputy Clerk of Courts for about 30 years, also worked as a clerk at MDU, Evelyn’s Motel, worked at the Gettysburg Sale Barn on sale days and served as United Methodist Church secretary/treasurer for many years.

Elaine lived in Gettysburg, SD, until 2008 when she moved to Dell Rapids, SD, and later to Sioux Falls, SD.

She enjoyed bowling, playing bridge, square dancing and was involved in Bible studies both in Gettysburg and Sioux Falls. While living in Sioux Falls Elaine belonged to a Tuesday morning devotional class, Tuesday afternoon dominoes group, and swimming aerobics class.

Everyone enjoyed her great sense of humor. She will be truly missed.

Elaine donated her body to the Sanford USD Medical School in the hopes that others may possibly avoid the pain and suffering of congestive heart failure (CHF) and chronic obstructive pulmonary disease (COPD).

Luce Funeral Home of Gettysburg has been entrusted with Elaine’s arrangements. (www.familyfuneralhome.net)