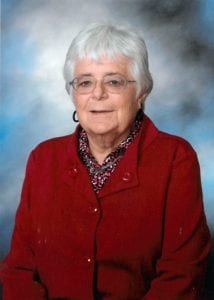 Elaine Delores Thomas was born to Charles and Helen (Fillipp) Kula at the Spencer Maternity Home, Gettysburg, SD on April 25, 1930.  She was the youngest of three children.

Elaine was raised on the family ranch along the Missouri River.  She spent her young years around the Forrest City store which her parents ran for a few years.

She loved riding horses as a young child.  While attending East Cattron Country School, one of Elaine’s duties was hauling buckets of water.

While Elaine attended high school, she worked at the soda fountain of the local drug store and this is where she met the love of her life, James Thomas.  On Dec. 4, 1946, they were married in Rapid City, SD.  They bought a farm in Potter County and since jobs were scarce, they spent several winters traveling to California to supplement the family income before deciding to become full-time South Dakota residents.

Elaine was involved in the family farm/ranch operation.  She enjoyed cooking, gardening and working in her yard.  She also enjoyed attending her local ladies’ social clubs and square dancing. Elaine was a life member of both the American Legion and the VFW Auxiliaries.  She was also a member of the Sacred Heart Catholic Church.

Family was very important to Elaine.  She attended many activities with her children and grandchildren.   She enjoyed numerous activities with them such as; hunting, fishing, water skiing, snow skiing and trail rides.   Along with this she still had time to spend a dollar in the casinos.

Elaine and James were snow-birds for many years and enjoyed traveling throughout the US, Mexico, Canada and Fiji.

Luce Funeral Home of Gettysburg has been entrusted with Elaine’s arrangements. (www.familyfuneralhome.net)