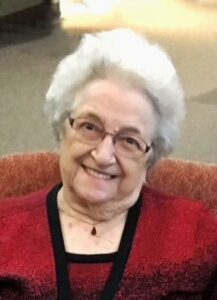 Her funeral service was held Monday, Oct. 11, at the Cambria Presbyterian Church in Cambria with Pastor Penny Johnson offi- ciating, and burial followed in the Cambria Cemetery.

Gloria was born March
28, 1925, in Selby, So. Dak. She graduated from Get- tysburg, So. Dak., High School in 1945 and mar-
ried Robert Woitte on Feb. 9, 1946. As the wife of a career Air Force serviceman, Gloria lived and raised her family of four children in many places, including Agana, Guam; Tampa, Fla.; Alcoa, Tenn.; Fairborn, Ohio; Tokyo, Ja- pan; and Rapid City, So. Dak. Upon Bob’s retirement from the service, they moved to Cambria, Minn. to live near friends.

Over the years, Gloria worked as a clerk at Pink’s, Ehlers and Herberger’s. She belonged to a 500 Card Club and was an active member of the Cambria Presbyterian Church. Gloria loved fam-

ily and friends. She was an adventurous and gregarious person who loved to travel and social gatherings. Be- sides the 500 Card Club, she enjoyed playing many other card and dice games with friends, and especially enjoyed playing games with her grandchildren. She taught them the finer points of playing cribbage and she did not take prisoners. They learned quickly that if they did not count their cribbage hand right, Grandma would take their points. She loved practical jokes and had a wicked sense of humor. She also loved her dogs, Skoshi and Gretchen, and all the therapy dogs who came to visit at Woodstone.

She was preceded in death by her husband Robert O. Woitte, her sons Robert L. Woitte and Terry L. Woitte; her parents Mary (Kapfen- stein) and Emmanuel Hetter- le; her sister Violet Schekel of Gettysburg, and her brother Art Hetterle.

The family thanks the doctors and staff at the New Ulm Medical Center and the Allina Hospice Team and to the staff at Woodstone where Gloria was a resident for the past seven years.

The funeral service was Livestreamed through the Minnesota Valley Funeral Homes Facebook.

To leave an online condo- lence for her family, or to sign the guestbook, go to: mvfh.org