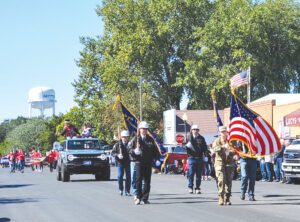 This year’s GHS homecoming parade in Gettysburg was led by the American Legion and VFW Color Guard, with GHS senior Kinsey Schuchhart carrying the American Flag. The parade was held through downtown Gettysburg on Friday, Sept. 24, under sunny skies with a chilly breeze. Also pictured are the homecoming royalty, King Logan Decker and Queen Kirstie Lake, driven by Philip Nagel in a new Bronco from Lamb Motors. They were followed by the Gettysburg High School marching band. The parade drew a good crowd. See inside for more from the homecoming week.