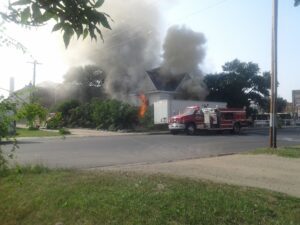 Flames swept up the south side of what is known locally as the old Schlachter house in downtown Gettysburg, but were quickly knocked down by firefighters on the scene. The house, which was believed to be built around 1910 by one of the town’s early residents, Nicholas Schlachter, started on fire around 5 p.m. on Sunday, Aug. 8. Firefighters from Hoven and Lebanon came to help. The structure is still standing, and the fire is under investigation. For the past several years the home has been owned by Joan Powell.