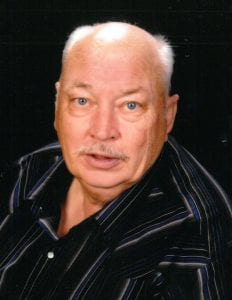 Jim started first grade in the Gettysburg school system and would stay with Grandma Tobin after school until his mom and dad got off of work.  The family later moved to the country to farm. Jim would ride his horse to North Morton where he attended school with Ben Shoup’s children.  He then attended high school in Agar.

He later went to work in construction driving truck.  He also worked for Stan Asmussen in the summers with harvesting in Agar.  Jim’s father had a garage in Agar and he received mechanical training from him while working on cars and pickups.  In the later years Jim worked at the Chevy garage in Gettysburg.  He then started doing auto body work at Del’s Body Shop in Gettysburg.

Jim married Dianne Fisher on Feb. 15, 1964.  To this union two children were born.  Son, Terry, was born in 1966 and daughter, Lynn, was born in 1967.  Jim worked at Del’s Auto Body until September 1995 when they moved to Sturgis, SD.  In Sturgis he worked in trucking for a few years and then went to work as a mechanic at Rockingtree Landscape.

He technically retired in 2005 but then went to work at home on his ’57 Chevy that he and Dianna dated in.  Jim and Dianna did some traveling, they enjoyed several cruises with family and friends.  Jim also enjoyed camping.

Jim enjoyed his grandchildren and great-grandchildren very much.  He had many health issues and surgeries over the years but handled them with a great attitude.  Jim always had a quick wit or an answer back.  He will be greatly missed by his family and friends.  Many who have been attentive with visits, calls, and assisting with cares the past six months.

He was preceded in death by his mother and father.

A memorial service was held on Monday, May 18 at Gettysburg United Methodist Church with Pastor Jeff Adel officiating.  Burial followed immediately at the Gettysburg Cemetery.

Friends and family may sign his online guestbook and leave written condolences for the family at blackhillsfuneralhome.com.