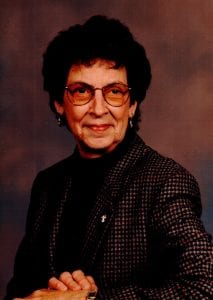 Jeannine Marie Mikkelsen VanDenEykel Johnson died on Sunday, Oct. 20 at Avera Maryhouse in Pierre at the age of 88.

A memorial service will be held on Friday, Oct. 25 at 2 p.m. at the Onida Methodist Church with inurnment to follow at the Onida City Cemetery.

Jeannine was born on May 18, 1931 to Axel and Katherine (Fast) Mikkelsen at the Spencer Maternity Home in Gettysburg, SD.  She spent her early childhood on the family farm in Garner Township. She attended Weidenmen School for 8 years and then the family moved to Onida, SD. She graduated from Onida High School in 1949.

She married Jake VanDenEykel on Feb. 9, 1950 in Las Vegas, NV. Two children were born to this union: James and Vana. She spent the next 40 years working in several business places including interior and exterior painting.

Often called by her nickname “Mike,” she was the first woman in Potter County to be elected as a County Commissioner and served for 7 ½ years before moving to Sioux Falls in 1994. While in Sioux Falls, she took over management of a large apartment complex.

Jeannine was so proud of her daughter and son. They made her life complete. She loved to make denim quilts and made sure her grandchildren and great-grandchildren each had their own quilt. She also embroidered dish towels.

She was remarried to Bruce Johnson on Nov. 28, 2003 and they made their home in Sioux Falls.  She moved to Pierre in August of 2018 and made her home at Edgewood Assisted Living.

Jeannine was preceded in death by her parents and her brothers Bob and Darrell.

Online condolences may be written at www.isburgfuneralchapels.com