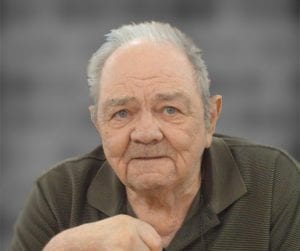 Graveside services will be at 2:30 p.m., Saturday, Sept. 21,  at the German Zion Cemetery, Tolstoy, with Pastor Jeff Adel presiding.

Kermit John Hinkel was born on May 14, 1934 to John and Gilma L. (Kline) Hinkel, Jr. at Pisgah, Iowa. He attended school in Pisgah.  Kermit married Norma Dilley and they had two sons. He joined the United States Air Force in 1956 and was honorably discharged in 1960.

In 1976 Kermit married Wanda Dutt, and one daughter, Sarah, was born to this couple.  The family made their home in Gettysburg, where he lived for the remainder of his life.

Kermit held various jobs over his lifetime. He worked as a mechanic, operated a gas station, helped area farmers, and was an over the road truck driver.

He entered the Avera Oahe Manor in 2017.

He is preceded in death by his parents; and two brothers, Lyle and Earl.

Luce Funeral Home of Gettysburg has been entrusted with Kermit’s arrangements. (www.familyfuneralhome.net)