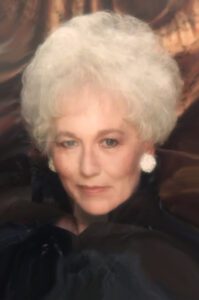 A private burial of her cremains will take place at a later date.

Leila’s parents moved into Gettysburg and started the Quality Furniture Store. Leila lived near them and worked at the Gettysburg Bank. She met and married Howard (Howie) Glover, who was in the Air Force stationed at the base north of Gettysburg. After completing his service, they owned and operated the Standard Oil Station. Leila and Howie had two daughters, Roberta (Bobbi) and Rebecca (Becca). Then in 1964, the Glovers moved to Chamberlain for Howie’s job with the SD National Guard. Howie died in 1977. Following her father’s death, Bobbi married and gave Leila two grandsons, Thomas and Joseph Martin.

In 1979, Leila met and married Lyle Dohman and moved to Aurora, NE. This union gave her two loving stepdaughters, Debra Rykman (Val) and Sharleen Wilken (Jim) and seven more grandchildren. Sadly, Lyle died of leukemia in 1983, at which time Leila moved to Aberdeen to live near her sister, Mary Lou. She worked at St. Paul’s Lutheran Church.

Over the years Leila welcomed more grandchildren, great-grandchildren and even a great-great grandson.

She was a golfer, bowler, gardener, cook, bridge player, master crossword solver and fixer of many things. She would prefer a gift card to Menards over a bouquet of flowers or jewelry. She will be sorely missed.

Leila’s family asks that memorials be sent to Countryside Hospice, 415 S. Crow, Pierre, SD 57501. The family is so grateful for the staff at Edgewood and the Avera Hospice nurses for their care of this special woman. They are angels among us.

Luce Funeral Home of Gettysburg has been entrusted with her arrangements. (www.familyfuneralhome.net)