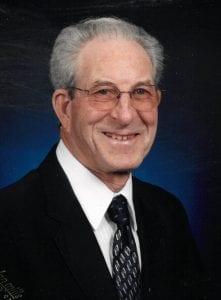 The funeral service for Louie W. Genzler, 87, of Aberdeen and formerly of Gettysburg, SD was held Friday, Nov. 8, 2019 at Holy Cross Lutheran Church in Aberdeen. Rev. Jay Rossman will officiated.

Louie Walter Genzler, son of George and Hannah (Stauss) Genzler was born Aug. 23, 1932 at Yale, SD. When he was young, he and his family moved west of Gettysburg where they farmed. When he was eight years old they moved to a farm near Lebanon, SD. He attended country school. Louie farmed with his family until he entered the United States Army in January 1953 and served in Germany as a telephone operator. Louie was united in marriage to Sieglinde Wihler on Nov. 6, 1954 in Mannheim, Germany. He was honorably discharged from the United States Army in February 1955. Louie and Sieglinde returned to Lebanon where they bought a farm. Their operation included raising dairy and stock cows, having the first milking parlor in Potter County. They also raised hogs and small grains. They sold the farm in 1997 and retired from farming.

Louie was very handy with tools and enjoyed his job. He loved camping, fishing, gardening, hunting, especially pheasant and deer hunting. He enjoyed his backyard which many considered more like a park.

In lieu of flowers the family prefers memorials. Memorials and condolences may be sent  to: Sieglinde Genzler

Carlsen Funeral Home and Crematory of Aberdeen has been entrusted with arrangements. www.carlsenfh.com