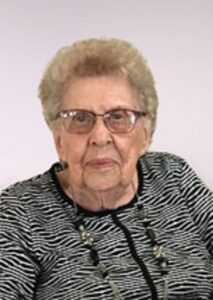 Marcella accepted a teaching job in Veblen, South Dakota.  The teachers would go to the local Twite’s Restaurant for lunch. One day while they were there, her future husband, Ardean “Beans” Twite was there.  The rest is history, and they were married on July 22, 1945 in Wilmot, South Dakota.  Each year around their anniversary, they would try to attend church in Claire City, South Dakota as that is where the church had been moved. After teaching for a few years, she became a homemaker. She moved to Gettysburg, September 2014, to be closer to her daughter and son-in-law.

Marcella was a member of Our Savior’s Lutheran Church where she was actively involved.  She was also a member of the American Legion Auxiliary, Unit No. 76.  She liked to decorate cakes for friends and family. Grandma Marcie loved decorating cookies with the girls. She enjoyed embroidering dish towels and reading a good book.

Their only child, Sara Jane, was born on May 22, 1954.  Her most rewarding thing about growing older was seeing her three granddaughters graduate from college, get married, and seeing her five great-grandchildren.

She is preceded in death by her husband, “Beans”, on January 26, 2011; parents; brother, James; four brothers-in-law; four sisters-in-law; many uncles, aunts, and cousins.