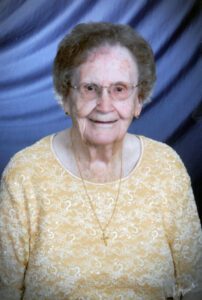 Marie Josephine (VanBockel) Umiker was born September 12, 1918, to Peter and Rena (Hiemstra) VanBockel at Hardwick, Minnesota.  When Marie was seven years old, she and her family, along with other relatives, came on an immigrant train to Lebanon, SD.  The family settled on a farm south of Lebanon.

When Marie was 10 years old their family home burned down and so the family lived in a granary while a new home was built.  Her family farmed during the “Dirty 30’s” and Marie told stories of dust storms in the summer and blizzards in the winter.  Times were hard, her father even asked to borrow $5 from her at one point.

She received her 8th grade education at Roy School and then waited for her younger sister to graduate from 8th grade so they could attend Gettysburg High School together.  They spent their weekdays in Gettysburg at a boarding house where they did house cleaning and babysitting to pay for the room and board.  She graduated from high school in 1938 and four months later married John F. Umiker on September 8, 1938, at her parent’s home south of Lebanon.

John and Marie made their home at Whitlock’s Crossing, a country store/filling station/post office, located near Forest City by the Missouri River.  They spent five years at Whitlock Crossing, at first living in the back of the store and then eventually living in a home there.  John purchased their first “used” car for $150 right before they were married.  While living at Whitlock Crossing, they became parents of Eldon and Renea.

In March of 1943 the family of four moved to a farm south of Lebanon, which they had previously purchased in 1941.  Here their family grew, and they added Bernadine, Verna, Marcia Ann (stillborn) and John Douglas.  They lived on the farm for 25 years, at which time they moved to Gettysburg and turned the farmhouse over to their oldest son Eldon.  During their stay in Gettysburg, Marie got a job working at the Oahe Manor as the head cook for 13 years.  Her husband, John, died February 24, 1995.  At the age of 97 Marie became a resident of Avera Oahe Manor – one day she drove herself to the senior center for lunch and to play cards, and the next day she moved into the manor.   She was a bright spot to many of the employees at the manor and Marie enjoyed many conversations with the “nice” people who took care of her.

Luce Funeral Home of Gettysburg has been entrusted with Marie’s arrangements. (www.familyfuneralhome.net)