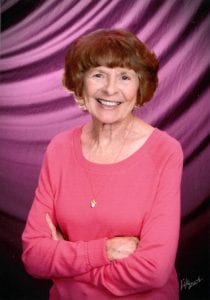 Marla was born Nov. 18, 1937 to H.V. “Buck” and Lura Mae (Pratt) Smith on the family farm near Herford, SD.  She spent her childhood near Viewfield, SD and later moved to Kennebec in 1945. Marla graduated from Kennebec High School in 1956 where she participated in cheerleading and played basketball for the Kennebec Canaries. After High School, she attended Southern State Teachers College in Springfield, SD earning an Elementary Teaching Degree in 1957. She taught three years in a country schoolhouse in Sully County. Other jobs she held included waitressing at her parent’s cafe, bookkeeping and later becoming the American Family agent in Gettysburg in 1984 where she retired in 1999.

In June of 1957, Marla met the love of her life, Gerald Gerber, while on a double-date with her sister Joy and Jerry Bieber.  Gerald and Marla married on June 6, 1959 at Emmanuel Lutheran Church in Gettysburg. From this union came four children. Gerald died suddenly in May of 1988.  She later married Calvin Reuer.

Marla was lovingly known to her family as Aunt Jeanie or Grandma Jeanie.  Her infectious laugh will be remembered by all.  She was a member of Emmanuel Lutheran Church where she served on altar guild and LWML.  She was an excellent bowler with her highest score being a 276.  In the summer, you would find her outdoors tending to her garden where she would later spend days canning her tomatoes, salsa, pickled beets and her infamous hot dill pickles.  For family gatherings, everyone looked forward to her Texas Sheet Cake.  She loved sports and attended many Battler games with her church family.  Grandma Jeanie also spent as much time as she could attending many of her grandchildren’s events.  Marla served on Gettysburg Country Club Board, American Legion Auxiliary and was Booster Club President.

She was preceded in death by her parents; husbands, Gerald and Calvin; sisters, Marcine and Marilyn Joy.

Luce Funeral Home of Gettysburg has been entrusted with Marla’s arrangements. (www.familyfuneral home.net)