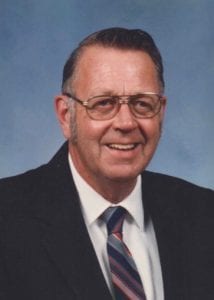 Merlyn Ardean Mellang, son of Adeline E. (Derby) and Clarence W. Mellang, was born at Williston, ND on March 11, 1937. He was raised and educated in Wheelock, ND, graduating with the WHS Class of 1954. He served his country in the United States Army, being inducted Nov. 16, 1956. Following his honorable discharge on Nov. 14, 1958, he settled in Williston where he started his grocery career at the Red Owl store and later Super Valu. He married Janice Pederson at Tioga, ND on June 16, 1960. They lived in Williston until 1966 when they moved to Poplar, MT where Merlyn managed a grocery store for one year. In November 1967 he moved to Gettysburg to manage Cameron’s Super Valu. He was employed at that store, now known as Langer Family Foods, until retiring in 2005. Merlyn belonged to the Emmanuel Lutheran Church in Gettysburg. His hobbies included handyman activities of all types, and following the Minnesota Twins, Minnesota Vikings and NASCAR racing. Merlyn enjoyed being outdoors and after retiring he was a groundskeeper at the Gettysburg Country Club. He appreciated his pets and loved socializing with friends and family.

Honorary casketbearers were Jim Stokke, Alfred Nagel, Ronnie Kosters, Trudy LaRosh, Mike Sanders and all of his friends and colleagues that worked with him at Cameron’s Super Valu/Langer’s Family Foods.

In lieu of flowers, memorial contributions may be made to the Emmanuel Lutheran Church, 601 E Logan Ave., Gettysburg, SD 57442 or the Veterans Administration (VA).

Services are in care of Lien Funeral Home, Bowdle. (www.MillerLienFH.com)

One response to “Merlyn Mellang”