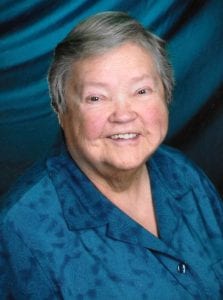 Funeral services will be 1:30 p.m., Saturday, Feb. 15 at Emmanuel Lutheran Church Gettysburg with Pastor David Otten presiding. Burial will be in the Gettysburg Cemetery. A prayer service will be held at 7 p.m., Friday, Feb. 14 at Luce Funeral Home, Gettysburg with visitation one-hour prior.

Nota was born Sept. 28, 1935 in Gettysburg, SD to Erle and Priscilla (Hull) Neyhart.  She attended Iverson Country Grade School and graduated from Gettysburg High School in 1953.

She married Dale E. Berg on Sept. 1, 1957 at Lutheran Memorial Church in Pierre. They had three daughters: Barbara, Lori, and Janell.   They lived in Grand Forks and Underwood, ND and returned to Gettysburg, SD in June of 1974.

Nota had several jobs during her lifetime: bank teller at Potter County Bank and First National Bank in Pierre, grocery store clerk in Underwood, cook at the Gettysburg School for 9 years, cook at the nursing home, and part-time kitchen staff at Bob’s Steak House.  She worked at the Gettysburg Medicine Rock Senior Center and Nutrition Site until retiring in October of 2001.

She was an active member in her church.  She was involved in the Lutheran Mission Guild, Quilting for Charity, and was a Bible camp cook for many years.  Nota was a member of the VFW and American Legion Auxiliary where she served as President, Secretary, and Treasurer.  Nota loved to spend time with her family, read, travel, camp, sew, make quilts, and play cards and games.

Nota was a beautiful, sweet angel, with a heart of gold.  She had a sparkle in her eye, a mischievous smile, and was always young at heart.  She was the nucleus of the Neyhart family and hosted many family reunions.

Nota was preceded in death by her husband, Dale; daughter, Lori; parents; and brothers: Neil, Max and Kurt.

Luce Funeral Home of Gettysburg has been entrusted with Nota’s arrangements. (www.familyfuneralhome.net)