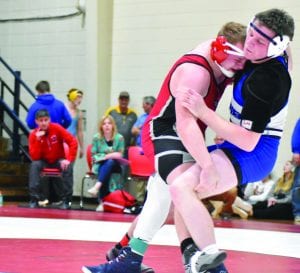 Potter County wrestling coach Michael Schlachter, left, kept an eye on the action as GHS senior Battler Joey Wheeler (Janelle) goes to work on his opponent during the Region 1B wrestling tournament in Sisseton on Saturday, Feb. 22. Wheeler won second place in the 182 pound division of the tournament, earning a berth in the State B tournament in Sioux Falls this weekend. GHS junior Brayden Schlachter is also heading to the state tourney which will be held at the Sanford Center.