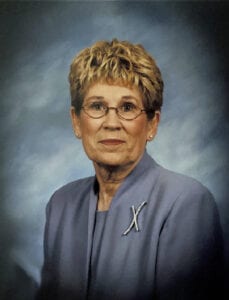 Patricia Stoner, 85, of Gettysburg, died Friday, June 12, 2020 at Avera Marshall Regional Medical Center, Marshall, MN. It is with great sadness that the family announces Patty’s sudden and peaceful passing, surrounded by her family.

Patricia Mae Stoner was born May 26, 1935, in Lebanon, South Dakota, to Harold and Edna Anderson. Patty lived in Gettysburg until she and Lyle moved to Marshall, MN in June 2018.

A native of Lebanon, South Dakota, Patty attended Lebanon Public School where she graduated Valedictorian at the age of 17.  She later continued her education and graduated from Northern State University, and soon after began her teaching career for many years.

Patty was a devoted wife, mother, grandmother, and great-grandmother. She so enjoyed her family and the various family activities that consumed much of her time, such as camping, boating, snowmobiling, horse showing, 4-H, motorcycling, her 1957 Chevrolet, and attending music concerts involving family members. Her main passion has always been education, and in her words “moulding young people’s minds”.

Patty began her teaching career in 1957, and for the first few years of her career taught in rural schools, later moving into the Gettysburg Public School District. Patty devoted her life to the betterment of her students, school, and community. She was a true testament to what every educator hopes to achieve during their career.  Her many students have expressed how fortunate they feel to have had not only a teacher that gave high level instruction and education, but someone who also dedicated herself to her students in the same manner she dedicated herself to her family. It came as no surprise to her past students, co-workers, friends and family when she received an executive proclamation from the State of South Dakota, and Governor Daugaard, recognizing and commemorating her many years to the teaching profession.

Luce Funeral Home of Gettysburg has been entrusted with Patty’s arrangements. (www.familyfuneralhome.net)