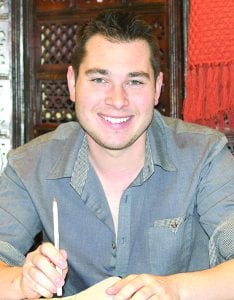 At 1 p.m. on Thursday, March 29, Potter County News staff met online with the general manager’s office in Mobridge. It was an unexpected meeting made at the request of the owner. The paper had sold.

J. Louis Mullen, of Buffalo, Wyoming, purchased the operations of the Potter County News of Gettysburg, along with the Mobridge Tribune, the Monday Reminder, and the West River Eagle of Eagle Butte from Larry and Roberta Atkinson of Mobridge.

The sale was effective March 29.

Mullen, 33, grew up in small communities. His first job was a paperboy for the Sioux City Journal at four years-old.

“I grew up in the industry,” Mullen said. “My parents moved to Wyoming when I was 10 to run the Newcastle News Letter Journal. From that age, I’ve worked every aspect of the newspaper business. From janitorial services to publisher, I’ve filled every position available.”

“My decision to purchase weekly newspapers is really just a reflection of the owners and staff who came before me,” Mullen said. “Larry and Roberta have put out a great group of newspapers for decades. They’re a service to the community and have helped ensure continued success for the publications.”

The Atkinsons moved to Mobridge in 1981 and Larry became the news and sports editor of the Tribune, which was then owned by Gene and Margy Chamberlin. The Atkinsons started buying stock in the company the next year and in 1993 purchased the remaining stock of the Chamberlins and took over the entire Mobridge Tribune operation.

In 2007, the Atkinsons purchased the Potter County News and West River Eagle from Dave and Carol Clausen.

“It has been an honor to be able to publish newspapers for our readers of the three newspapers and Reminder,” said Larry Atkinson. “Newspapers really actually belong to the communities in which they are published and all an owner or publisher does is become a caretaker of those newspapers. The owner/publisher’s job is to make sure they are serving the area readers by providing accurate and fair reporting of the news and sporting activities and detailing services and shopping opportunities in our communities. I hope we have done a good job doing that.”

“All three newspapers have very dedicated staffs who truly care about serving their readers and their communities,” Atkinson said. “I was so incredibly lucky to be able to work with such talented people.”

“I encourage the three communities to continue to support their hometown newspaper,” Atkinson said. “A newspaper plays such an important role and there is nothing in our rural areas that can do a better job providing the coverage of what is happening in our communities. Newspapers are a window into the area they cover and are the recorders of history for our communities.”

“Roberta and I hope the business community will continue to support the newspapers with advertising under the new owner, as they have done with us,” Atkinson said. “A newspaper will only survive with consistent advertising, as subscriptions alone do not pay for the cost of producing the papers.”

“We wish Louis well in his new role as caretakers of our communities’ newspapers,” Atkinson said. “As we have seen what his family has done over the years with the newspapers they publish, we feel confident our communities newspapers are in good hands.”

Molly McRoberts, who serves as the managing editor of the PCNews, said that although the change in ownership was a surprise, readers will not see changes to the way the news is provided for the community. “Bringing our readers the local news each week is what we do, and that will not change,” she said. “Louis shares our love of small town newspapers, and we look forward to working together to continue bringing energy and ideas to our publication.”

Mullen lives with his wife and two young daughters in Buffalo, Wyoming.