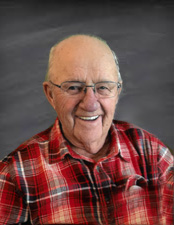 Funeral services will be held 1:30 p.m., Thursday, June 18, at the United Methodist Church, Gettysburg, with Pastor Jeff Adel presiding. Visitation will be one-hour prior to the service. Burial will follow the service at the Gettysburg Cemetery, with military honors.

Reinholdt Robert Dutt was born March 30, 1925 near Tolstoy, SD to Jacob and Christina (Holzworth) Dutt Jr. He attended Tolstoy Area Country Schools and graduated from Gettysburg High School in 1943 where he proudly wore #44 while playing football.

On Sept. 30, 1944, Reiny was inducted into the United States Army, serving during WWII. He was part of the Pacific Theater, serving in the Pacific for some time. His honorable discharge was obtained on Nov. 18, 1946. Reiny was always proud of his military service. He displayed it proudly by being part of the VFW and American Legion. He was also very involved in the planning, fund raising and building of the local veteran’s monuments.

On Sept. 3, 1950 Reiny was united in marriage to Norma Stoner. They married at the United Methodist Church in Gettysburg. Gettysburg became their home for their entire married life where they raised their three girls. Reiny worked hard to provide for his family. At first, he worked for the United States Postal Service while trying to get his farm up and running. Along with his farming, Reiny helped build many homes and businesses in the Gettysburg Community. He was also very involved in the building of furniture that can be found in many homes in the area.

Reiny will always be remembered as a community man and above all a family man. He was a lifelong member of the United Methodist Church, helping in the original remodeling. He also was a member of the Masonic Lodge and the Yelduz Shrine. Reiny was instrumental in obtaining the little Shrine corvettes that traveled to many area parades and gatherings. He could also be found helping with the Shrine circus when they were in the area.  However, family was of utmost importance. He did all he could to provide for his children and grandchildren. He encouraged them to try things that he did not have the opportunity to and helped them succeed in all of their endeavors. He was so proud of each one of them and looked forward to their time together.  He also became “Grandpa Dutt” or “Papa Dutt” to all of his daughter Lynette’s daycare kids. He was always there to offer a smile, a snack, and a quick trick to make them laugh.

He was preceded in death by his parents; wife, Norma on Dec. 22, 1994; daughter, Bonnie Wenzlaff; brothers: Gottlieb and Milton Dutt; and sister, Eileen Torbert.

Luce Funeral Home of Gettysburg has been entrusted with Reiny’s arrangements. (www.familyfuneralhome.net)