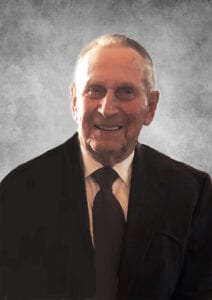 Following his education, Bob worked on the family farm before he enlisted with the United States Army. He was inducted into active service on January 5, 1955, serving stateside until December 22, 1956 when he received his honorable discharge. Bob returned to the family farm working alongside his father.

On January 8, 1966, he was united in marriage to Joan Swenson at St. Mary’s Catholic Church in Aberdeen, SD. They made their home in Gettysburg for a short time prior to moving to the farm north of Gettysburg. Bob and Joan kept busy raising livestock and their family of three.

In 1970, Bob was elected to the Hoven School Board, serving 28 years. He also proudly gave of his time to the Ralph Leui Post #135 in Gettysburg. He served several years as commander and also honored many veterans during his time with the funerals honor guard. He was a long-time member of Sacred Heart Catholic Church, giving of his time freely as an offertory usher.

In Bob’s free time he enjoyed helping neighbors, cutting hay and harvesting, attending rodeos with his parents, playing cards, attending tractor pulls and demolition derby’s, watching western movies (especially Gun Smoke), substituting as a rural mail carrier, and preparing his children and grandchildren for 4-H livestock showings. Family, faith, and farm were a main focus for Bob. The day he left to join God; he was busy cutting hay in his fields.

Luce Funeral Home of Gettysburg has been entrusted with Bob’s arrangements. (www.familyfuneralhome.net)