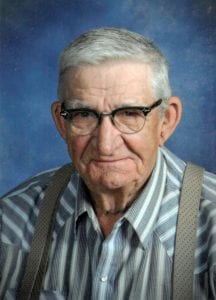 Robert “Bob” Theunissen was born at home to Herman and Ann (Bruckner) Theunissen in rural Hoven, South Dakota, on May 7, 1931. His father died in 1943 at the age of 39. He and his mother moved to a farm southwest of Hoven in 1947. His mother died in 1958. Bob continued to reside on the farm until December of 2018, when he moved into the Avera Oahe Manor.

Bob attended school at St. Anthony’s, boarding with the Sisters in an upstairs dormitory. He graduated from the 8th grade in 1945. Bob took a mechanic’s course through the mail. In 1958 he worked as a mechanic at Zabel Implement in Selby. He also worked for Neil and Peggy Nauman and trucked for Jim Beringer. Dutch Nagel, Melvin Maas and Bob formed MNT, Inc. and for several years he trucked under that name. For over 50 years he farmed with Chris, Melvin and Freddie Maas, who were neighbors.

In the early 2000’s he retired and started renting his land. At that time, he took up woodworking. He started making candle holders and later evolved to making very detailed tractors, trucks, combine, crawler, road grader, scraper, wrecker and other farm and construction equipment.

He was a member of the South Dakota Draft Horse and Mule Association. He and Don Hericks spent countless hours going to threshing bees, parades and other activities, which he thoroughly enjoyed.

He is survived by several cousins, and he was preceded in death by his parents.

Luce Funeral Home of Gettysburg has been entrusted with Robert’s arrangements. (www.familyfuneralhome.net)