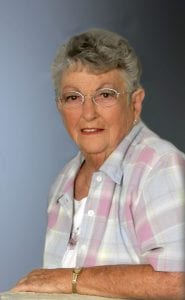 A memorial service will be held at 2 p.m., Friday, Feb. 7, 2020 at Emmanuel Lutheran Church, Gettysburg with Pastor David Otten presiding.

Sarah Guylyne Rieben was born May 11, 1929 in Webster, SD to Godfred and Mable (Williams) Rieben. She received her education while living in Webster, SD, EauClaire, WI and graduated from Sisseton High School in 1947.

Following graduation, Sarah moved to California to stay with family before returning to Sisseton where she worked as a nurse’s aide for the Sisseton Community Hospital. On May 26, 1949 she was united in marriage to Gerald Hatling. Gerald was enlisted with the United States Army and together they moved to Manhattan, KS where he was stationed at Fort Riley. They spent a few years moving during his service time prior to his discharge which included Alaska where Sarah worked for the Alaskan Airlines as a stewardess. Upon Gerald’s discharge, they returned to South Dakota where they lived in Aberdeen, Milbank and Pierre.

Sarah and Gerald were inseparable. They raised their family together and enjoyed day to day life together as well. Friends learned if you invited one it meant the other was coming along. Along with their boys, they enjoyed hunting, fishing, training dogs, golfing and traveling. In 1984, Gerald retired and together they spent the next 20 years wintering in Gold Canyon, AZ and their summers at Pickerel Lake, SD. In the early 2010’s, they retired to Gettysburg where she has lived until the time of her passing.

She was preceded in death by her parents: Guy and Mable Rieben; and one sister, Betty Rieben.

In lieu of flowers, memorials may be directed to the Avera Oahe Manor, Activities Department, 700 E. Garfield Ave, Gettysburg, SD 57442.

Luce Funeral Home of Gettysburg has been entrusted with Sarah’s arrangements. (www.familyfuneralhome.net)