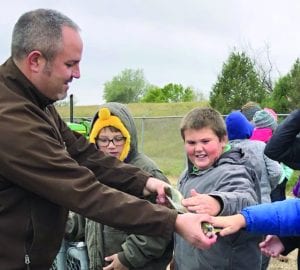 Middle school students from the Gettysburg School toured the Whitlock Bay Salmon Spawning Station on Wednesday, Oct. 9. Although there were no ripe females ready to spawn, the students got to see a fish swim up the ladder and see a male being milked and learned more about the process and importance of the fall spawning. The students were even excited to get the chance to touch a salmon, when South Dakota Game, Fish and Parks Senior Aquatic Habitat and Access Biologist Jason Jungwirth showed a fish up close to the kids. Although sixth grader Jace Wager (Kerry and Rachel) has been a longtime fisherman, he still smiled as he gave the salmon a pat. Also pictured waiting his turn to touch the fish is Joseph Biel (Kami and Derick Stanley). While folks are in town this weekend for the opening of pheasant hunting season, they are reminded that if they don’t have any luck finding birds, the fish are usually biting at Whitlock Bay west of Gettysburg.