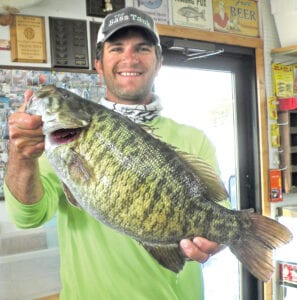 It was an exciting day at Whitlock Bay when Troy Diede of Sioux Falls brought this big Bass into the baitshop at South Whitlock Resort on Friday, July 16. According to the SD Game, Fish and Parks, the big one weighed in at 7 pounds 4.7 ounces, with a length of 20.75 inches. The girth of the fish was 19.25 inches. The baitshop also reported a tail spread of 6.25 inches, and a gill plate measuring 15.5 inches. The GFP reported that the big fish was returned to the water after being photographed and measured. This wasn’t the only big fish of its kind caught last week, with another caught weighing over 6 pounds reported at the bay. The fish in the waters west of Gettysburg are big and beautiful, and some are setting records!