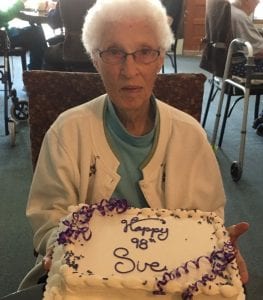 Susan Catherine Engel was born June 10, 1920 in Jamestown, ND to James and Catherine (Balster) Tobin.  She was one of 12 siblings.  After the loss of her mother during childbirth in 1930, Susan was raised by her grandmother, Mary Tobin, in Sully County.

She married Lloyd Archer and to this union a son, James Archer was born.  They lived on a farm in SE Potter County for several years before moving to Agar, SD.  Susan worked in restaurants for many years.  After the death of her husband, Lloyd in 1960, Susan and Jim moved to Gettysburg, SD.  She continued working as a waitress.  In November 1978 she married Clarence Engel, and to this union a son was born, Brad Engel.  Susan and Clarence ran the Gettysburg Bakery for many years; their rolls were known world-wide.

Susan loved to travel.  She and her sister, Theresa Frost, made several trips to Oregon to see their sister, Irene Frost.  There was never a dull moment when the three sisters were together along with her nieces and nephews.  She loved spending time with her nieces and nephews.  Susan also enjoyed her travels to Korea and Alaska to see her son, Brad.

In 2001, she moved to Sturgis, SD to be closer to her son and daughter-in-law, Jim and Diana, and later Brad and Onie Engel of Spearfish, SD.  She enjoyed retirement, and she did a great deal of walking and observing the Sturgis Rally.   Susan loved her many trips and family gatherings.  She would have been 99 on June 10, 2019.

Friends and family can sign her guestbook and leave written condolences for the family at blackhillsfuneralhome.com.