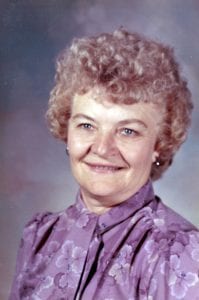 Thelma Rose Norris Hepper, longtime resident of Potter County, died Thursday, May 30, 2019 at Avera St. Luke’s Hospital in Aberdeen, SD, after a short illness.  It was her intention to set a new Norris record for longevity by exceeding her Uncle Cliff Norris’s record of 92 years and 1 month. So close!

Funeral  were Tuesday, June 11 at the United Methodist Church, Gettysburg, with burial in the Gettysburg Cemetery. There was also be a special tribute to her son, Mark Hepper, who died May 9, 2019 in Layton, Utah.

Thelma was born July 1, 1927; the fifth child in a family that grew to 10 children and flourished despite the great depression.  Her father introduced them as, “My “crop” that never failed.” She grew up on the family farm south of Lebanon and attended (as did most of her siblings) all eight years at Roy rural school, just half mile from their farm.

Thelma graduated from Gettysburg High School, class of 1945, the honor student of her class. WWII had created a teacher shortage so after only five weeks of summer school in Spearfish, SD she began a teaching career. In all, that career lasted 30 years (with a few years off to start a family). She enjoyed teaching and the students she taught.  In an interview with the Potter County News in 1990, she said of her years in the rural public schools, “I’ve had the opportunity to teach a lot of wonderful people over the years.  I’ve been very fortunate. Because you teach the same children for sometimes three, four years in a row, I think you become much closer than public school teachers. Not only that, but you get to know their families.”  She went on to teach the children of some of her former students. “Once you teach them, they become a little like yours.” she said. “I still like to keep track of them.” Along with all her other students, she taught the last four of her own for some of their elementary school years.  Being a teacher all over Potter County cemented Thelma’s interest, friendships and loyalty to the people there. She spent all but three of her nearly 92 years in Potter County, and that was her choice.

They spent the first two years of their marriage on a farm north of Gettysburg and then moved to Gettysburg.  It was during this time that they joined the Church of Jesus Christ of Latter-day Saints which was to be a positive influence on them for the rest of their lives.  Four daughters later, in the spring of 1955, they moved back to the farm, sadly, without their third daughter, Sheryl Jean, who died shortly before her first birthday from a brain tumor. In all, nine children were born to Herb and Thelma.

They bought a farm east and south of Gettysburg and farmed both places for a few years before finally moving a house to the “new” farm and moving into it in December 1971, over Christmas vacation. Thelma went back to teaching school in 1965. She also taught primary and adult Sunday School or served in her church’s ladies organization as well, all while helping with the farm work, giving birth to her ninth child in 1967, encouraging her own children to do their studies and piano lessons, and still found the time to complete her own college courses so that her life was busy with learning and teaching all year around. She graduated from Northern State College in 1977, with a B. S. degree in Education; all credits had been earned in either summer school or NSC extension courses she attended on Saturday mornings after a full week of teaching.

Thelma’s life was busy and required all of her talents and endurance.  She helped, first her father on his farm with a team and horses to do the haying and cultivating and then her husband, doing the same job, only by this time using a tractor without a cab.  Having found that Thelma, at the age of 12 or so, had quite a knack for making delicious pie crust, her mother turned over the pie-making duties to her. Thelma also had a knack for music, singing and performing. She and her sister, Betty often entertained family and guests with their musical talents.  Later on, Mom and Dad quickly found that while traveling in a car with children of assorted ages, it helped to have everyone singing; so Dad sang bass and Mom sang alto, and however many children joined right in. She was a master gardener, seamstress and barber and when the grandchildren began to arrive she was a favorite choice to babysit as well.  She loved to read and passed that love on to her children by reading many books to them. Thelma  crocheted, and researched family history on both her and Herb’s family lines. When she died there was a Bible, a novel, the TV remote and an almost finished pot holder with the crochet hook and a ball of yarn on her table in the living room.

She retired from teaching in 1989 and in 1995 she and Herb moved to Gettysburg where she said she was busier after she retired than when she taught full time.  Thelma worked part-time at both the local Family History Center and Dakota Sunset Museum and was an enthusiastic, faithful member of her church and the local Historical Society.  Self-taught, she played piano and accordion “by ear” at the Manor for her own as well as their enjoyment. Herb died in 2004 and she spent the next 15 years participating in local events, visiting and being visited by her eight children, 23 grandchildren and 23 great-grandchildren.

In the last few years, she joined the Legion Auxiliary, played cards at the Senior Center and enjoyed visits to and from extended family. Her father having been born in England, Thelma had always wanted to visit relatives there.  She got her wish and was also able, to visit Branson Missouri, Hawaii, Alaska and many historical places in the continental U. S.

Thelma was fortunate to enjoy good health for most of her life with only a minor stroke which caused some trouble swallowing and then, in her 80’s, one hip replacement. She summed up her life in these words, “It has been a full, fruitful life.  It hasn’t all been easy, or fun. What has made it meaningful is to know the gospel is true; that life is eternal, and that if they want it badly enough, their family can be forever.”

Luce Funeral Home of Gettysburg has been entrusted with Thelma’s arrangements. (www.familyfuneralhome.net)