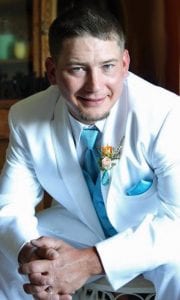 Travis James Karst was born Sept. 5, 1980 in Hoven, SD to Donald and Lynn (Hermann) Karst. He attended and graduated from Hoven High School in 1999. While in high school, Travis participated in wrestling, finishing as a state qualifier, multiple times. All through school, Travis worked for Hoven Repair.

Following high school, he continued his education at Mitchell Vo-Tech for two years where he received his certificate as a certified power lineman. He went to work for CamWal in Selby until his desire led him to return to the family farm in 2006. He worked with Melvin Maas for many years, a man whom he found to be a mentor and dear friend.

On June 19, 2010, Travis was united in marriage to Jodie Huber on the Donald and Lynn Karst farm near Hoven. They made their home 8 miles west of Hoven where they welcomed their son, Jayden in 2011. Travis cherished his time with their son. They were inseparable and spent every minute they could teaching each other the meaning of life.

Travis “Trapper” enjoyed life and was always making the most of it. He spent every minute he could with family and friends. He enjoyed hunting, fishing, and playing jokes on those around him. He will be remembered as a hard worker and for his fearless attitude towards life, never scared of the events or animals around him. He was always ready to face anything thrown at him. In his spare time, which was little with the farm life, he loved spending time helping coach Jayden’s AAU wrestling team. He would do anything to spend time with his son.

Travis’ life will be cherished by his wife, Jodie and son, Jayden of Hoven; parents: Donald (Lynn) Karst of Hoven; his siblings and their families: Brooke (Tyler) Ulrich and children Kayl and Kemry of Pierre and Paige (George) Sperry and son, Crue of Blunt; mother-in-law and father-in-law: Gordon and Roxanne Huber of Hoven; maternal grandparents: Bill and Betty Hermann of Hoven; brother-in-law and sister-in-law, Jesse (Amber) Huber and family, Wyatt, Brynn, Emma and Colt, all of Hoven; and numerous aunts, uncles, cousins and friends.

He was preceded in death by his paternal grandparents: James and Vivian Karst; grandparents-in-law: Raphael and Sylvia Huber and Ralph Dewald; uncles: Rich Penrod and Billy Hermann; and family friend and mentor, Melvin Maas.

Due to COVID-19, travel and other restrictions at this time, a private funeral Mass with immediate family was held at St. Anthony’s Catholic Church, Hoven with Fr. Darin Schmidt presiding. Burial followed in the church cemetery.

Luce Funeral Home of Gettysburg has been entrusted with Travis’ arrangements. (www.familyfuneralhome.net)