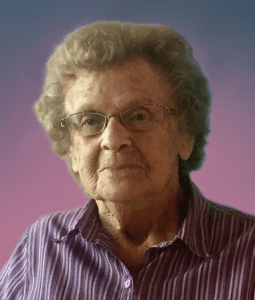 Vivian was born Sept. 7, 1925 to Leonard and Francis (Lemler) Starks. Leonard had homesteaded their place in the northwest corner of Potter County along the Missouri River. Her best memories of her younger years are how her brothers always watched out for her in both good times and hard times.

After graduating from Gettysburg High School, Vivian attended Northern State Teachers College in Aberdeen and Black Hills State Teachers College in Spearfish where she earned her teaching certificate. She taught several years in country schools in rural northwest Potter County. Then, did mostly substitute teaching as her kids grew up. Vivian also enjoyed teaching Sunday school and Bible school at her church.

On Nov. 14, 1947, she married Bevin Roseland in Brookings, SD. They lived on a farm south of Seneca for 15 years, then bought their place north of Seneca where she lived until her passing. She spent a lot of time gardening and canning, baking bread, buns and cinnamon rolls. She also helped Bevin and the boys with the cattle on many occasions. Her favorite thing to do though, was cook a big meal and have family members over, most of all her grandkids. She thought of her grandkids as the best thing in her life. She loved having them with her on the farm collecting eggs, climbing hay bales, playing games, or fishing in the pond.

Vivian was President of the Women’s Legion Auxiliary in Seneca for many years. The fact that all three of her sons served their country in the military was very important to her.

Vivian is survived by her husband of 71 years, Bevin, her sons Nick (Linda) Roseland, Pierre, Kevin (Peggy) Roseland, Redfield, and Loren Roseland of Seneca; eight grandkids, 17 great grandkids, her sisters-in-law, Ruth Starks of Gettysburg and Helen Starks of Aberdeen, and many nieces and nephews.

She was preceded in death by her parents, her five brothers, Clyde, Keith (Bud), Art, Milton, and Vivian’s twin brother who died at birth, one sister, Kathleen, a great granddaughter, Alexys, and her daughter-in-law, Alma.

Luce Funeral Home of Faulkton has been entrusted with Vivian’s arrangements. (www.familyfuneralhome.net)