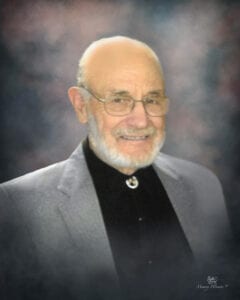 William Edward Eliason was born June 9, 1923 at Gorman, SD to Henry “Hank” and Estelle (Pence) Eliason. He graduated from Gettysburg High School in 1941.

After high school, Bill traveled to Long Beach, CA to work for Douglas Aircraft, building DC3 airplanes. He joined the US Army as a paratrooper in 1945. After his honorable discharge in 1946, he earned his pilot’s license on the GI Bill.

In 1947, Bill was united in marriage to Dorothy Briscoe. To this union four children were born: Larry, Pat, Kay, and Sue. They lived on the farm in rural Potter County.

During Bill’s life he was a jockey for Mike Herron, a semi-truck driver for Tennant Trucking and Beringer Trucking, an airplane mechanic, auctioneer, rancher, and owned his own aerial spraying business. Later he co-owned Fischer-Eliason Spraying with Don Fischer.

Bill attended school in Kansas City, MO and earned his aircraft engine and frame mechanic’s license, and he repaired and rebuilt airplanes throughout his life. Once he retired, he went to work planting trees for the Potter County Conversation District.

In 1986, Bill was united in marriage to Sharleen Fischer.

He was preceded in death by his parents, and numerous aunts, uncles, and cousins.

Luce Funeral Home of Gettysburg has been entrusted with Bill’s arrangements. (www.familyfuneralhome.net)