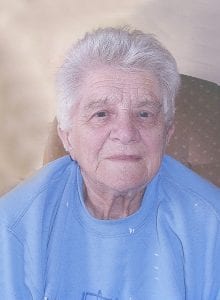 Zenta Leitl, daughter of Kresenz (Siebauer) and Michael Leitl, was born at Tabertshausen, Germany on Nov. 24, 1925. This is where she was raised and graduated from high school.

Following her schooling, she worked on a farm. Zenta married Theodore Popyk at Plattling, Germany on Feb. 12, 1947. They remained in Germany until September 1950 when they migrated to the USA, eventually settling in Clifton, New Jersey. Theodore found work as a carpenter and Zenta kept busy working on assembly lines for companies such as Nabisco as well as raising three daughters.

Theodore died Jan. 16, 1996 and Zenta moved to Hoven nine months later. In 2013, she relocated to the Bowdle Nursing Home where she lived the rest of her life.

She belonged to St. Anthony’s Catholic Church. Over the years she did lots of knitting and sewing and more recently enjoyed completing jigsaw puzzles. She also spent lots of time reading her German books.

In addition to Theodore, she was preceded in death by her parents, Michael and Kresenz; and three sisters (Franziska Bauer, Theresa Weinberger and Maria Pirkl).

Services are in care of Lien Funeral Home, Bowdle. (www.MillerLienFH.com)